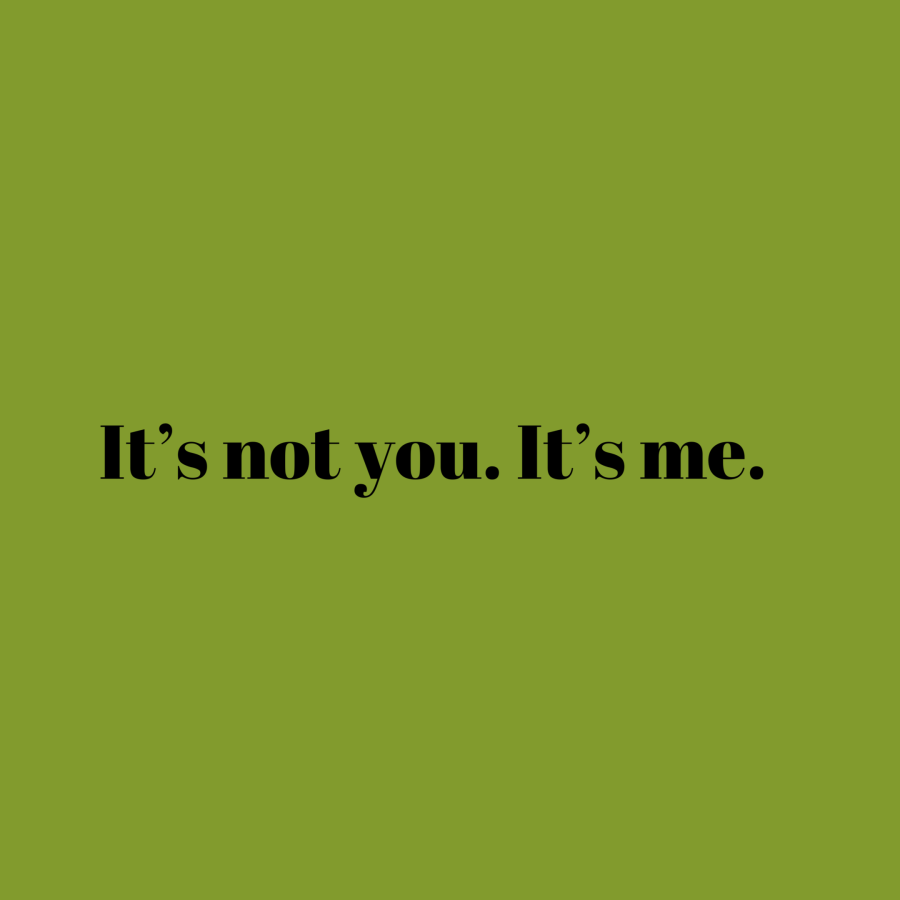 Really “It’s not you. It’s me” should be the one sound track that most relationships end on. It’s really a gem of a timeless sentence that most men find their one true identification with their patriarchal forefathers.

If the person who coined this famous break up line was still alive, he would’ve been the biggest influencer there ever was and if he was entrepreneurial, he would have been richer than the richest men who have walked the face of this earth.

This sentence has been repeated so many times, by so many men, walking through so many gates of time, that it has become the universal harbinger of bad news in a romantic relationship.

This sycophantic chant became so loud in my head that the entire breakup never registered. He never had to give any reasons because I didn’t want to hear them. He never had to wipe my tears because why was I crying when he was clearly stating himself as the problem? He never had to stay long enough to help me work my way through a break up because didn’t he say he was the loser when he said it wasn’t me, it was him? What else do I want from him?

The fact is that this sentence has done women a lot of bad. Serious bad. Emotional bad. It has messed up with their heads. It has clogged their self-esteem.

But because men have been handed manuals I don’t think that the obscure language that I’m using hitherto for this blog post would make any sentence to self-absorbed, serially dating men. So I’ll break it down for you.

You see when my first boyfriend said that it wasn’t me, I believed him. I believed him so far as to offer him emotional support and the time to grow up. He declined my fervent offers and begged me to break up with him even though it was torture to him to go away from me but he couldn’t let me stay in an emotionally unfulfilling relationship. I was a little stumped. I was emotionally fulfilled. It was as much torture for me to go away from him. I was smacked around the face senseless by his sense of chivalry and my own need for him. But he convinced me that I deserved someone better. And I believed him. I let him go against my heart.

But then I saw him, mere two days later, at our spot. Where we had promised to spend a lifetime together. Where he and I had waited for the other to get done with work so we could hang out. The spot where we had become exclusive. I saw him there. He wasn’t alone. He had a girl with him. They were kissing. The rest is a blur. I missed work for four days. It was mind boggling that I was single for the next six months even though he had assured me that he was the one with the emotional problems. Meanwhile he had burned through an alarmingly long list of girlfriends in those six months.

But I was a little more “street” when I got into a relationship six months later. Six months into it my boyfriend called one morning. We always texted instead of calling so this was odd. He wanted to meet me. He ended the conversation with “We need to talk”.

Unassumingly I paid for the expensive dinner that he devoured. Unwittingly I smiled lovingly at him. Stupidly I asked what he wanted to talk about. And then he said the famous “It’s not you, it’s me”. The rest, including him, is history.

I have been through my series of bad and honest boyfriends. The end of any relationship hurts. Even the ones that weren’t anymore than a fling. It’s the end of something that hurts more than anything. That something would so abruptly stop being a part of my life. That hurts.

But surprisingly the hurt is a lot less when my boyfriend or significant other talked about the reasons. When he treated me like a person who deserved the reasons. Not all reasons have been deep, thought-provoking, character-changing reasons. Some have been as simple as “I’m just not stimulated as much anymore”. But then we talked about it and I learned a thing or two about him and myself too. I appreciated the education.

What I didn’t appreciate ever is a break up with a famous tag line crutch. And I’ll tell you why.

After my initial naïveté regarding popular break up lines, soon I knew all of them. There are only so many of them.

“We have a great time together but I’m not ready for something long term”.

“I’m not the one you’re looking for”.

“This would’ve been great if I wasn’t going away to another state for work and long distance isn’t my thing”.

What happened after my initiation to them was a psychosomatic response that I developed to them. And that’s exactly why these lines were designed by patriarchy.

When I hear my significant other saying them my heart rate goes up. My breathing quickens. I have a state of panic come over me. I anticipate what’s coming and know what’s coming. I feel like the walls are closing in on me.

When there is an emotional upheaval happening, of course I can’t concentrate on my boyfriend breaking up with me. He gets an automatic pass. Men get many passes because of the system that they’ve built and this is another system. He doesn’t have to explain anything. He just has to offer a tissue to wipe my tears with. He has no responsibility in helping me through the process of the dissolution of a relationship because his part in it ended as soon as he said a line which men before him have said without any accountability, without any remorse, through centuries of relationship milieu .