Sorry some language on this blog is going to come across as erratic and slightly immature but I was a smart ass. And that made me a smart mouth.

Because I was an awkward teenager and did a lot of growing up with my parents I was never a quintessential child. I was wiser than my peers by virtue of being my parents’ and many teachers’ side kick and therefore, to my own self, I held a vantage point like few other kids.

But I didn’t mean any harm. Like most talker-backers, I was my own brand of stand-up comedy. I was an entertainer in my mind. What I said wasn’t in retaliation but to impress. Sometimes it came at the expense of others’ feelings but my motto of “everything’s fair in jest and jokes” didn’t see a change. “Others were getting hurt because they couldn’t take a joke” was my line of reasoning in defense of my somewhat high-brow but nevertheless, cutting humor.

All my friends were like me too. Growing up in the 80’s and 90’s we had somehow learned tough survival skills and used them freely. One of these skills was being a smart mouth. The other was of course the assumption that we were innocent of any moral crime as we were just joking.

My dad enjoyed my banter with him and my mom. He thought this was a sign of intelligence. He had a twinkle in his eyes always when I debated with him and tried to prove him wrong. My mom, on the other hand, feared that my mouth would get me divorced. Her opinion was that I always had the last word and this could cost me precious relationships. My mom is a liberal woman who was raised by liberal parents and an orthodox society. Pretty much how I was. I think we both knew we were just as good as men but didn’t quite believe it to be widely known and feared for our acceptance.

While almost no one validated my teenage theories and ideas, my dad always did. He made me feel extremely important. He encouraged me to choose for myself. He guided me but let me choose the path ultimately on my own. He never forced his decisions on me. Even though my trajectory as a physician was almost decided since I was born, I wasn’t pushed into it. I was encouraged to make independent decisions about career and life.

My dad got me. He didn’t give credence to my mom’s worries at all. He knew this was a phase and this was all I had to make a place for myself in this world. He knew the struggles that come with puberty and teenage.

It’s not that my dad indulged me unreasonably. There were moments when he checked me. Politely, like a friend, like his own dad had in another time. When my dad was a teen. He could tell that I was growing up faster than he had counted on and he wanted most of this growing up to be of my own accord. He liked that I had a reasoning and a questioning mind. He could see that I was a little full of myself. Therefore he developed a camaraderie with me where he became my wingman, confidante, quasi-brother, nurturer and my mentor. He became the one that I ran to with news of all kinds. I ran to him with my successes and my perceived failures. I ran to him with heartbreaks and infatuations. He was my secret-keeper. He was my safe place.

I grew up and my impishness faded in the background. I became like most adults. Considerate, careful with my words, I look for politically correct ways to put my point forward (usually) , and I’m genuinely nice where needed and politely indifferent where things don’t seem to be engaging to me.

I became more laugh-out-loud funny and less sarcastic. I realized that humor can’t be biting or it loses its funny. I developed a deep soul connection with my mother as a daughter and a woman. I became more analytical and less impulsive. I started weighing my options against my choices. I learned I can’t have everything.

Which brings me to teenager upbringing. Teenage is a very talked about period in life. We talk about hormones, sexual attraction, academic difficulties, the stress of growing up, the pressure of fitting in and the desire to stand out. It is easily the most documented period of the human life. Teenagers are a motley crew overall. Some are timid, some incisive. Some positive, some with an identity crisis coming to the surface. And yet………..

I see mommy blogs about raising toddlers but almost none for raising teenagers, about validating teenage and about befriending our teenagers. When actually teens can be our friends. They’re old enough to share our wisdom and still young enough to get hurt regularly by the world. Where are the teen mommy blogs? Why aren’t we discussing that?

And I know a little of the why behind the dearth of teen mommy blogs and teen parenting advice. See parenthood has become a commercial commodity now. Motherhood especially. And particularly toddler motherhood. That’s the motherhood that social media and electronic media and print media (in short all media) highlight. They all find those pictures to be cute, those problems to be endearing.

But who would want to know about a teen who talks back, is struggling with identity crisis, is struggling with career choices or gender dysphoria. No one opens up their Instagram or Facebook for that. Even moms of teens don’t go to social media for that. They’re going there to live vicariously through women ten years younger than them. They wistfully look at their pictures of their toddler’s third birthday or ongoing potty training woes. They wanna be a part of that. They don’t want to be a part of their teen who is trying to find himself amidst all the influences and inspirations. Amidst all the nay-sayers and yay-sayers. Amidst all the confusion and chaos. Another fact is that due to late age of first or second child compared to previous generations, a lot of us will be and are going through menopause while our child is going through teenage. Two hormonal uproars! See why psychiatrists recommend counseling to parents and teens together? We need bridges to be built in order for communication to happen.

And now coming back to my own impish behavior and how I tamed it! I didn’t! I did not tame it. My dad did. He tamed it like we tame a spirited horse. He nurtured me in moments of weakness and countered me in moments of potential difference of opinion. What he didn’t do was alienate me. He always acknowledged me. He validated my thoughts even when he didn’t agree with them. A lot of my views on politics and religion and the practice of medicine were new-age thinking to many people. But to Papa they were my ideas and ideologies. He didn’t treat them any less than he would treat a statesman’s word. That is how he grounded me and that’s how he made me never hate my imp for getting me into trouble. He showed me that the imp is a part of me. That as long as I chose the right words, I can extend a message, which may not be agreeable to everyone, without the message itself sounding crass or vulgar or disagreeable . That as long as my imp came out when people were expecting it, it was okay. That my imp should be a happy one, a smart one, a funny one, but should be an individual. He didn’t take my individuality from me.

This isn’t an advice for parents with teenagers because I can’t give it. I don’t have teenagers yet. This is just a reminder for myself when I’m a mom of hormonal teenagers. This is just to tell my older self that I got this. That despite my teenager’s angry outbursts and sarcastic commentary on me, they’re my children. They’re a part of me. And they’re going through the same teenage that I once went through. And just as my teenage had no lasting negative or positive effects on me, theirs won’t have either. We all gotta just ride out the conflicts and the hormones and judgements and the mood swings as gracefully and as happily as we can. 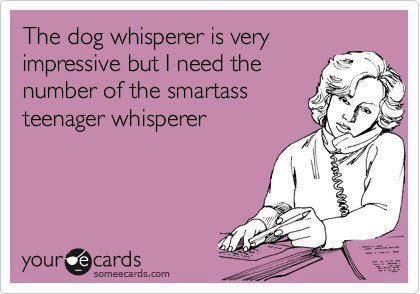